Welcome to part 2 of my 7-part series on dictators, an irreverent guide to some of history’s worst people and part of my effort to bring geopolitics and history to people who want to sound thoughtful at dinner parties but are too lazy to read The Economist.

As I mentioned last week, Congo’s Mobutu Sese Seko never named himself President for Life, which worked out okay for him, because he died in exile.

Four years later, Bokassa toyed with the idea of being a great Islamic leader, converting to Islam in the hope of securing foreign aid from Libya’s Muammar Qaddafi (more on him later). In another demonstration of his humility, he took the name Saleh Eddine Ahmed Bokassa, after basically one of the most revered Muslim warriors in history.

But a few months later, he saw the light, the “light” being the fact that Qaddafi was not going to come through with the cash. He converted back to Catholicism and, like so many failures before him, turned to his backup plan: Crowning himself emperor.

In a chintzy move, Emperor Bokassa I spent only about one-third of Central Africa’s annual budget on the ceremony to crown himself emperor, leaving the other two-thirds for his regular travel to Paris, because who the hell wants to spend any time in a country that’s completely crumbling? The $20 million party nearly bankrupted the country, excuse me, empire, but Bokassa received financial help from France, which needed the uranium that was so abundant in Bokassa’s new fiefdom.

The ceremony lasted two days, with troops in fancy dress uniforms and a mini-Bokassa, the new emperor’s four-year-old son (from his sixth out of, like, 19 wives; people eventually stopped counting) and heir apparent, in a tiny white military uniform with gold trimmings, riding in a horse-drawn carriage. You can see it on YouTube. It’s actually quite adorable, this toddler tyrant who can’t get into the carriage on his own and who yawns while attendants fawn over him. The future of the empire was in strong but tiny white-gloved hands.

Bokassa spent much of the ceremony sitting on a two-ton solid gold eagle-shaped throne, a symbol that he was full of solid gold shit. And he wore an ornate, diamond-encrusted crown, made in Paris, of course. 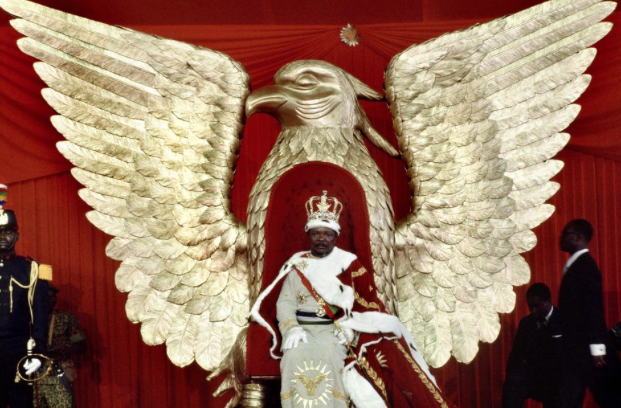 Even this bird wanted to get away from Bokassa.

But as any college exchange student knows, French lovers can be so fickle. They inevitably go back to their wife, even if you are atomically well endowed. The French government backed deposed President Dacko in a coup to oust Bokassa in 1979. To prove there were no hard feelings, they eventually allowed Bokassa to live in a chateau outside Paris before he chose to return to his homeland in 1986. He served some prison time in Central Africa but was ultimately released and died at home in the capital, Bangui, in 1996.

Oh, and rumors that Bokassa was a cannibal were never proven. The fact that I even have to mention this should worry you.

Next week: The Godfather of African Dictators 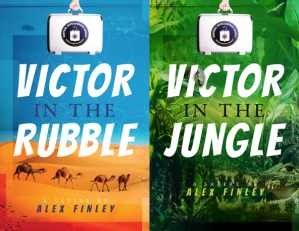