Welcome to part 4 of my 7-part series on dictators, an irreverent guide to some of history’s worst people and part of my effort to bring geopolitics and history to people who want to sound thoughtful at dinner parties but are too lazy to read The Economist.

After Mummer Qaddafi died, it was time to name a new Longest Ruling Dictator.

Enter Equatorial Guinea’s Teodoro Obiang, who has not undertaken this burden lightly.

Obiang came to power in this tiny oil-rich nation in 1979 in a very original way: he ousted his uncle in a coup d’état. For some reason, six whole years passed before Obiang generously took full control of the national treasury in order to protect his civil servants from the terrible temptation of corruption.

Lucky for the people of Equatorial Guinea, Obiang and his family are immune from such temptation, likely because Obiang is in permanent contact with the Almighty, according to the very objective state-run radio station. That’s why everybody was totally cool with Obiang putting more than half a billion dollars of the country’s money into U.S. bank accounts controlled by him and his family.

You read that right: U.S. bank accounts. Not every dictator relies on numbered accounts in Switzerland. Indeed, Obiang’s son, also named Teodoro, adores the United States. He attended Pepperdine University and fell in love with Malibu, where he purchased a beachfront mansion so he would have a place to show off his Michael Jackson memorabilia, including a crystal-covered glove and crystal-covered socks, and to park his many Lamborghini after driving home from his private Gulfstream G-V jet. 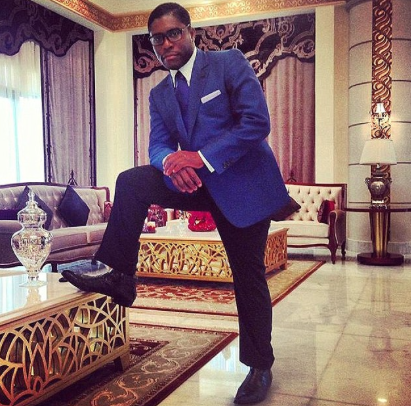 Teodoro Obiang the Younger attempts an awkward moonwalk in his palace.

He also owned not one but two fifty-foot speedboats, each with a $2 million price tag, and one of which he had shipped to Hawaii for a vacation, where he promptly capsized it and had to pay $400,000 to salvage it. And just in case this evil-dictator’s-playboy-son-cliché wasn’t complete, Obiang Junior dated, of course, a Danish beauty queen.

(On a side note: that same beauty queen, Christina Mikkelsen, won the title Miss Denmark 2016 and will compete in the 2016 Miss Universe contest, which is supposed to be held in the Philippines, which has its own dictator angle in Rodrigo Duterte.)

According to a Department of Justice lawsuit, Obiang the Younger spent around $315 million on properties and luxury goods between 2004 and 2011. For some reason, the number crunchers at Justice couldn’t figure out how he had managed to do that when his official salary was only around $100,000 a year. But I say don’t castigate the guy. He should get kudos for working so hard, because it takes real effort to spend about $45 million a year on someone’s used socks.

Up next: How to go from Breadbasket to Hell in a Hand Basket.