The 2020 presidential election is going to be nuts. I spoke about election security with Minnesota Public Radio. Listen here.

I chatted with the national security web site Divergent Options about VICTOR IN THE JUNGLE, cat fashion shows, and how my brother prepared me for a red invasion when we were kids. Listen here!

The Dutch current affairs program Nieuwsuur did a year-end segment on “The Year of the Spy,” featuring former MI-6 director Sir Richard Dearlove and…me! (It’s in Dutch, but don’t worry, a lot of it is in English.) Watch it here.

I was on BBC News discussing Russian intelligence officers who were caught red-handed in Europe, but how we shouldn’t get complacent with their mistakes. Watch the clip here.

It’s normal for Russian officials to visit Russian nationals held in US prisons. But two detained Russians seem to be getting way more visits than usual. I talked to McClatchy about why that might be. Read the article here.

Buzzfeed asked me about accused Russian spy Maria Butina and what she was likely up to in South Dakota. Spoiler: She wasn’t there just to see the sights. Read the article here.

I was in studio with Peter Boyles at 710 KNUS, chatting about terrorism, Iran, and why we are still in Afghanistan. Seriously, why? Listen here.

I talked about Victor in the Rubble, humor, and absurdity with Lee Ferran for RealClearLife, all while sitting in a bar listening to fantastic 80s music. It was humorous and absurd. I am only disappointed he didn’t fit any Def Leppard lyrics into the article.

My old friend Olivier Knox and I chatted about why CIA people never say “the CIA” and other scintillating facts. (When I say “old friend” I mean “long-time friend.” Neither Olivier nor I will ever get old.) Have a listen here.

I discussed sex, lies, and videotapes with The Warax and Natasha podcast. And Natasha complimented my fashion sense. Listen here.

I talked to Vice News about the Nunes memo and how the US government can’t keep a secret.

I spoke with France 24 about Jared Kushner’s security clearance kerfuffle and what it means for the American people (spoiler: it’s not good!). Watch the clip here.

MSNBC’S Deadline: White House, with Nicolle Wallace, picked up on my POLITICO Magazine piece, The Recruitables: Why Trump’s Team Was Easy Prey for Putin. Check out the screen grab: 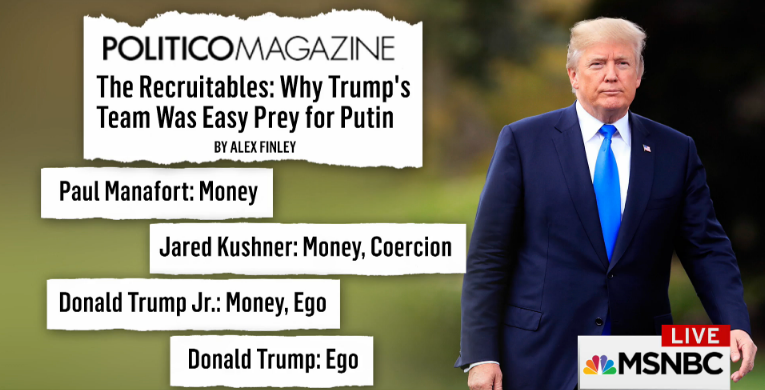 I was on C-SPAN’s Washington Journal, discussing the future of spying, the importance of soft power, and how national security should be a non-partisan issue. Watch me here!

The CIA will face some challenges to untangle the Trump-Russia tentacles. I discussed it with The Dan Riendeau Show in our neighbor to the north. Listen here.

What’s significant about the WikiLeaks dump of CIA documents? I chatted with the Canadian Broadcasting Corporation about it. Watch the interview here.

As President-elect Donald Trump takes on CIA, I talked to The Cipher Brief about the potential challenges the adversarial relationship might have on field operations. Listen here. Or read the transcript here.

What’s it like to leave the safety and security of a government job to launch your own project? Scary as sh*t, but fun! I talk about it here with the podcast Happen to Your Career.

UK spy podcast Spies and Shadows TV asked me to invite five spy figures to dinner. Like a good spy, I broke the rules. Have a listen.

Colorado radio personality Peter Boyles and I agree the world is in flames and we’re all up sh*t creek, but it made for an entertaining conversation! Listen in here (I come on in minute 48:00 of hour 3) and here (hour 4).

I talked to Colorado Matters on Colorado Public Radio about the Cold War, Red Dawn, and how a dinner with Russians changed my world view.

I loved chatting with Covert Contact and Blogs of War about Victor in the Rubble and the absurdity of bureaucracy. Listen here.

I chatted with International Spy Museum historian Vince Houghton on the SpyCast about Victor in the Rubble and the lengths good officers will go to overcome the absurd bureaucracy.

I did an interview with OvertAction.org. Find out what parts of West Africa stuck with me, how I compare to Ian Fleming and John LeCarre, and what I am doing for folks who don’t like reading The Economist.

Come listen to me talk on the radio machine and soundcloud! I’ve been busy talking about everything from why M*A*S*H is more realistic than Homeland to how I have control over UFOs.

Listen to me chat with my alma mater while Knickerbockers rally ’round.