Welcome to part 3 of my 7-part series on dictators, an irreverent guide to some of history’s worst people and part of my effort to bring geopolitics and history to people who want to sound thoughtful at dinner parties but are too lazy to read The Economist.

Want more laughs? Check out my novels, Victor in the Rubble, a satire of CIA and the War on Terror, and Victor in the Jungle, about a populist dictator. In the meantime, enjoy learning about dictators!

The Godfather of Africa’s dictators was easily Muammar Qaddafi, the yardstick by which everyone measured every other dictator. Other dictators became “the longest serving dictator after Qaddafi” because the guy ruled Libya for 42 years.

Much like U.S. politicians who like to remind voters they come from hard-working families with modest backgrounds and were raised castrating pigs, Qaddafi informed his people that his father was a Bedouin goat herder and thus he was a pull-yourself-up-by-the-goat-skin-boots kind of guy, a self-made autocrat who had successfully ousted a monarchy in a coup. After kicking out the king, he then insisted on being called King of Kings, which his people must have found hilariously ironic.

Like many sons of goat herders who become absolute rulers, Qaddafi was lavish. He started with crisp military uniforms laden down with more medals than Michael Phelps and later moved on to the colorful flowing robes of a Bedouin as he nurtured his pan-Africanist movement. He reinforced his Bedouin image by pitching a tent in capital cities across the globe during his international travel. He often parked a camel just outside for full desert effect. Never one to take his security lightly, the tent was bulletproof. The camel was not. 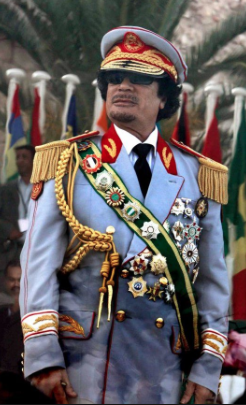 Qaddafi had to earn his medals. Being King of Kings helped.

Also not bulletproof were the women in Qaddafi’s Amazonian Guard, badass female bodyguards in lipstick and heels who swore an oath of chastity and were officially known as the Revolutionary Nuns. He also had nurses, plenty of them and mostly from Ukraine, one of whom was described in a WikiLeaks cable as “a voluptuous blonde.”

But all the chaste love and Ukrainian caregiving couldn’t save Qaddafi, who also, unfortunately, was not bulletproof. He and his loyal companions discovered this in a drainpipe in Sirte, Libya, where rebels shot the King of Kings.

Fittingly, some reports state he died wearing a wig. While in retrospect it is easy to say that maybe he should have worried more about quashing a rebellion than taking time to place faux tresses on that big squishy head of his, cultivating an image of a spritely leader had always been part of his winning strategy (up to that point, at least).

Usually, he was very good about prioritizing his looks with other necessities. Once, in the middle of a procedure to pump his stomach fat into the wrinkles on his face, he got up to eat a hamburger, briefly setting aside his vanity to concentrate on his hunger.

At the United Nations, Qaddafi makes an impassioned plea for hamburgers for everybody.

But on October 20, 2011, both he and his wig succumbed, finally giving someone else the chance to be Africa’s longest ruling dictator.