Welcome to part 7 of my 7-part series on dictators, an irreverent guide to some of history’s worst people and part of my effort to bring geopolitics and history to people who want to sound thoughtful at dinner parties but are too lazy to read The Economist.

Part 5, too? What the fuck is wrong with you? Read it here.

On the other side of the world, South America’s most “charismatic leader” (aka dictator) was the late Hugo Chavez of Venezuela. Chavez tried to take over the country in a coup in 1992 but failed. So he turned to the electoral system instead, and oddly enough, it worked.

He was rather poetic, a manner he skillfully employed as the spiritual leader of La Revolución Bolivariana, promoting a blend of populism and socialism that also required that he have mythical status.

He cultivated this image by always being on television. He was on television for hours a day. I’m not sure he ever took a pee break. By some estimates, he spent 40 hours a week on TV. His ministers were required to attend the broadcast, and sometimes El Presidente made policy on the show. Once on TV he ordered troops to the border with Colombia (a move that was necessary because of, you guessed it, U.S. domination in Colombia), like if Nene Leakes used her reality show platform to bomb Kim Zolciak (for liking the United States).

I’m not sure how Chavez ran the country when he was so busy being both Hoda and Kathie Lee and his ministers were like Oprah’s audience waiting for their favorite things. But it worked, if by “worked” you mean the country ran out of everything.

Even though Venezuela has lots of oil and sold most of it to the United States (we may be imperialist pigs, but even a socialist has a soft spot for greenbacks), Venezuela has excelled at lacking enough dollars to purchase anything on the international market, which is particularly awesome when you factor in the fact that Venezuela produces very little of its own. Soon, store shelves were empty. The people Chavez was fighting so hard for were in deep shit, literally, because they had no toilet paper. And you know whose fault that was? Ours, the imperialist pigs, the only ones buying oil and providing any cash to the country.

Admittedly, being a Chavista can be complicated.

So instead of allowing his people to think logically, Chavez appealed to their need for spiritual fulfillment and took on the role of religious icon overseeing the revolution. He also had really cool friends like Sean Penn.

Sean Penn explains how Hugo Chavez had the Venezuelan people by the balls.

Venezuelans ate up this legend Chavez created, maybe because they didn’t have any food. When he exhumed the body of Simón Bolivar, the popular revolutionary leader who led the fight for independence of much of South America from the Spanish, in a clear attempt to ride the dead socialist’s coattails, Chavez live-tweeted the somber ceremony, telling his adoring followers, “That glorious skeleton must be Bolivar, because his flame can be felt. Bolivar lives!”

Bolivar still lives, now in the form of Chavez’s ghost, which shows itself at politically expedient times. After Chavez succumbed to the cancer rays the United States shot at him, he appeared to his anointed successor, Nicolas Maduro, as a little bird. You know what the little bird told Maduro to tell the people? That they should vote for Maduro or risk being cursed. And like hell if the people were going to take that risk, considering all the other deep shit they were in already, and not listen to the little talking bird. Maduro won the election.

Maduro also said that Chavez went to Heaven and told Jesus to pick a South American Pope. Chavez really has some pull.

Who can blame Maduro for turning to miracles? This bus-driver-turned-politician has, after all, been running the economy on a wing and a prayer. Maduro has cracked down on the shop owners who create long lines outside their stores by refusing to stock their shelves with the products they can no longer buy because their currency is worth less, literally, than toilet paper.

Venezuela has even had to start importing oil, despite its vast supply, from the imperialist pigs up north. When even Cubans look at your country and wince, it may be time to rethink your life choices.

Often dressed in a bright yellow, blue, and red zip up sweatshirt that makes him look like a member of the Romanian Olympic gymnastics team, Maduro lacks the charisma of a dictator and I’m guessing he won’t last as long as Chavez did. As a wise Venezuelan once told me, the problem isn’t that Maduro is a former bus driver; it’s that he doesn’t know how to drive. 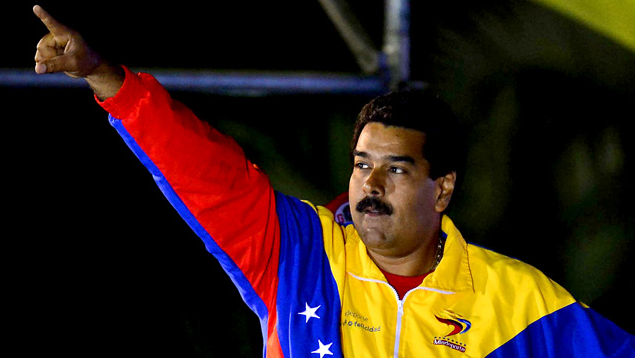 Nicolas Maduro, after perfectly landing a triple back flip with a twist for the Romanian Olympic gymnastics team.

One thought on “HIGH HEELS, WIGS, AND FLAMBOYANT ROBES (Part 7)”